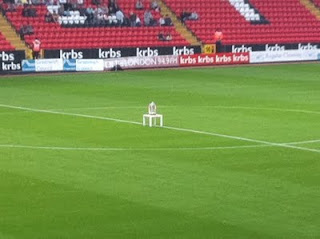 Charlton 1 Den Bosch 0
So my first sojourn to The Valley this season not only ended with a Charlton win, (something I’d forgotten after that awful finale/second half of last season) and some silver/tin ware.
It was strangely reminiscent of the Selhurst years, sitting there as part of a three and odd thousand crowd.
The Den Bosch away support was nice and noisy and from what I could see generally good natured. Their drummers and constant chanting bringing some much needed noise and atmosphere to proceedings.
Now down to the serious bit.  What were my first impressions of the new look Charlton. For a friendly, there was certainly some endeavour throughout the side. And Sir Chris didn’t make many changes, and those were not until quite late in the game – so I’m guessing it’s pretty much what Powell has in mind for the Bournemouth game.
Elliot was his usual reliable self.  Pulled off a couple of great shot stopping saves but was rarely tested with crosses.
The back four looked okay.  It will take a while for Morrison and Taylor to really forge a solid partnership, Solly looked safe, my only worry was the performance by Wiggins. On a couple of occasions I wasn’t sure whether he lost concentration or was out of his depth, but his positioning a times when facing an attacker was a tad suspect.
I got what I expected from Jackson, he hit the bar with a cracking shot. Danny Green, who looks a bit like a hairdresser to me, was full of running and despite a few of his crosses going astray did get plenty of balls into the box. Bit early to tell about Holland’s and Stephens. Of the two I was more impressed with Holland’s and did not really notice Stephens in the game too much.
The biggest worry would be the forwards. BWP will always pop up with a goal despite his work rate. Hayes looked like a more physically solid Benson, but without the running. We really need another striker to put those three under a bit of competition.
The two subs, Pritchard and Bover really impressed me when they came on. Bover typically Spanish. He gets the ball and then runs straight towards goal, not afraid of trying a pass or shooting.  Pritchard looked equally eager to take his opportunity, marking, tackling and running into attacking positions with verve.
All in all it looks like a work in progress, but a good work in progress. I’m looking forward to Millwall on Saturday (except for the fact I’ll be in the home end with my Millwall season ticket holding friend) and another good test for us.
Posted by Scoops at 03:03 No comments: 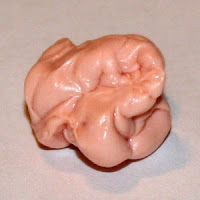 I spent last Friday assisting cleaning seats in the East Stand. Bloody hard work it was to.  I won't embarrass anyone by mentioning seat numbers, but there were several seats that had more chewed up, rock hard bits of chewing gum than a Wrigley's factory!  Really, if your an adult, you should know better than being so dirty.  And if your a child, DON'T DO IT AGAIN!
It was pretty rewarding if not mundane, and it's always nice to meet other Addicks, who aren't the usual group you sit with every other week.  Nice to know we really do have a wide and diverse demographic of supporters. Also the free tickets for the Den Bosch game will come in handy, and give me my own first hand look at the all new Charlton.
I'm expecting Sir Chris to name a line up that should be pretty close to his initial favoured eleven for the season.  It will be interesting to see if Jason Euell gets another opportunity to prove he's worth a contract.
It should be a good test for us, Den Bosch finished seventh in the Dutch equivalent of our Championship last season, which meant, i think, they qualified for the extremely complex ed play off system out there. (See http://en.wikipedia.org/wiki/Eerste_Divisie) 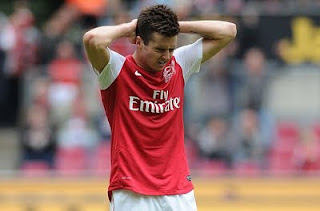 PS. I loved watching Jenkinsons' spectacular first goal for The Arsenal. (I have to admit to viewing it on my ipad probably too many times, but blame that on the beer).
Posted by Scoops at 04:59 No comments:


.Why did we have to win last night?  Don't get me wrong, I’m delighted with the pre season so far.  I know once the first ball of the season is kicked in earnest pre season friendly results disappear into the mists of time.  But only a few years ago, 'away' to Bristol City would be the type of game I would have been more than half expecting to win. As opposed to the last couple of years, where in all reality due to league position and playing staff I would clearly class us as underdogs.

Two games into pre season and I am now daring to dream seriously of a championship winning season. Sweeping all before us, with the odd 'shock' defeat thrown in to keep things a bit nervy/interesting!
We've still got two good tests in Cardiff and Millwall, where I do expect us to give a really good account of ourselves, plus the games against lower league sides.
From what I’ve read Bover-Izquierdo looks like he may be an absolute little gem in the making.  In fact I’ve not really read any poor feedback about the midfield (sorry Victor, it would seem you'll not be missed) which will give Chris Powell some very healthy selection problems if they all live up to the early hype/expectations.
Can't wait for Friday night’s game, it's actually becoming fun rather than purgatory being a Charlton supporter again. Let’s hope it continues
Posted by Scoops at 01:11 No comments:

Charlton (first half): Elliot; Warren, Wiggins, Taylor, Mambo; Wagstaff, Stevens, Bover Izquierdo, Jackson; Hayes, Popo.
Charlton (second half): Sullivan; Solly, Andersen, Morrison, Doherty; Green, Hollands, Pritchard, Davisson; Benson, Williams.
An encouraging start  to our pre season friendly program.
I know Welling United isn’t exactly top or testing opposition, but the reality is they are only 3 divisions below us in the pyramid. And hopefully after nearly going out of existence last year are on the way up.
What struck me from the highlights that were available on ‘Wings TV’ via YouTube, was despite it only being a friendly, there looked to be a confident and winning mentality on display from our new signings – which can only be a good thing and should crossover to those who have remained from last season’s unsuccessful squad.
Williams took his goal well, and who knows perhaps he will turn out to be one of those peaches that are accidentally unearthed. If Powell does fancy him, then we’ll have to act quickly as he is being strongly linked with Colchester United.
I’m looking forward to slightly more testing opposition later this week in Bristol City and Cardiff. According to the News Shopper there are still more signings to come, so it will be interesting to see if/ who appears prior to Fridays game.
Posted by Scoops at 03:52 No comments:

So, after the shortest close season I can remember, and this was without a European Championship or World Cup, we begin our pre season in earnest.

A plethora of new players have come in. The squad strengthened in all departments now, and alot of the dead wood of players who had seemed to get so used to losing it became the natural way of things gone.

I'm feeling more confident than I have about a season for such a long time.  Today's game against will be our first chance to see the new players, we'll also get an idea of how Powell wants the team to set itself up now he has his own group of players.

I can't make it today due to family commitments (kids birthday parties, school fair, gymnastics competition) but do have my tickets for the Millwall game at the end of the month. So will have to rely on mobile updates during the game and other bloggers after match reports and comments.
Posted by Scoops at 02:01 No comments:

A matter of opinion?

What with the arrival of Taylor, Pope and the new young spanish midfielder Ruben Bover Izquierdo (I know he's only a development player at the moment, but could you imagine the problems his name would present the North stand when it comes to composing a chant if he does break through?) we've now signed an amazing 12 players and as far as I can gather 3 have departed. (Anysiah, Reid and Racon).

This along with Dailly, Semedo and Llera not being included in pre season training would make six outgoing. The rumours are that Francis and Jackson may well be about to be sold, so perhaps another two of the old guard going?

It's all very confusing, and I have to admit quite exciting.

I can't remember a time of such wholesale change in the playing staff at the club.

The numbers of the new players are made up as follows:-

Those i'm assuming are definatley staying are (from the back) Solly, Mambo, McCormack, Harriot, BWP and Benson. This doesn't include other fringe and development players such as Warren, Cousins etc.

Exhausting trying to keep your head around it all.

As a relative virgin to blogging, I know that the idea is generally to get your own opinions and points of view out to a larger and relevant audience, but I thought i'd ask the question of anyone who might take a look at this post.  Of the squad in it's current state.  Which players would you consider shoe in's for the opening game against Bournmouth ? The defence and strikers are currently dictated by the numbers, so should not be too difficult to predict but the plethora of midfielders leave me baffled. Am assuming Hollands will definatley start, but which others?
Posted by Scoops at 06:43 3 comments:

Llera and Semedo out it would seem.

'Kelly Youga, now out of contract, reported back for some light work, while Christian Dailly, whose deal has also expired, attended Thursday's gym session.
But Joe Anyinsah, Jonathan Fortune, Michael Stewart, Kyel Reid, Miguel Llera and Jose Semedo were not present in SE9 after their contracts came to an end.'
The above was hidden in the middle of an article on the return today to pre season training.  I suppose Semedo is not a really big suprise, I would imagine we'll see the bbc or sky announce where he is going in due course.
Baring in mind how thin on the ground we are defensivley, I was a bit suprised to see Llera not at least involved initially in pre season.  Perhaps on a rolling contract, but again i'm guessing he's also got something sorted out.
Posted by Scoops at 04:08 No comments: