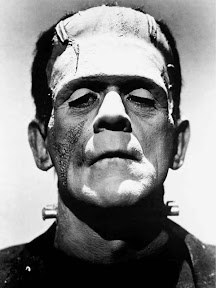 No the above is not a picture of our ex manager Dowie the mad rocket scientist or our nippy centre back Doherty it is indeed Frankensteins monster.

Ages ago, before sky had chosen to televise the Notts County game my wife had booked tickets to see Jonnie Lee Miller (trainspotting) and the bloke out of Sherelock (something Cumberbatch) in a new production of Frankenstein at the national. I've tried to get out of it, but to no avail. So the challenge tomorrow will be to get back to Dartford without finding out the score and watch the game 'live' having sky plussed it! This on top of resigning from my job.

As for the game itself a difficult one to call. With a pretty dreadful home record (county have not won at home since January 3rd) and our decent away record we might fancy getting maximum points ( and boy do we need them ). Despite being at the wrong end of the table, County don't have a negative goal difference and a consistent goal scorer in Hughes (horrible bloke). I'm thinking the best we could hope for is a 1-1 scoredraw. Mind you, of late I'm usually wrong, so here's hoping I keep up that particularbtradition in my predictions.

I'm really not sure quite where to start with this one.

I suppose with the positives. It was Jack my son of fives first Charlton game, and despite the lack of atmosphere generated by such a large crowd, the boy done well. Asked lots of questions, and never really got too fidgety or bored. And has infact asked to return, on the understanding that we don't lose every game. (a real Charlton supporter in the making).

The first half we were not all that bad. A few half chances not taken, and never really looking that troubled by at that time a nervous and unambitious Exeter side. What did seem quite obvious to me were several points that left me in no surprise come the final score.
None of the players from the word go looked comfortable in the 433 set up. We lacked any decent width, Jenkinson, who actually had a much better second half looked nervous about going forward and taking players on. If this is the formation we are to go for then Jackson needs to be playing at wingback and we need to bring in a right sided defensive winger or wingback.

Doherty, who despite his lack of I actually like, had a woeful game. The back header that gave an Exeter side growing in confidence their second goal, was school boyish. I appreciate he then went on a mission to get a goal back, but it is the ability to do the simple things that makes a great centre back, and he did none of those again.

One of the final points I'd like to make is the captains role within the club and on the pitch. I can't fault Dailly in his application and professional attitude during a match. What we really missed yesterday, and have done for sometime now, was anyone roaring at their colleagues when things weren't going well yesterday, and taking the game by the scruff of the neck lifting their colleagues and supporters alike into putting in an effort full performance.

I noticed at times (loath as I am to say it, how disjointed the management team looked in the dugout). Lots of notes being written by Sir Chris who was often in dialogue with Matthews whilst Dyer sat pretty prostate in the background. I hope the team (management) find their collective feet soon. Powell looked quite confused at one point when the subs were warming up in a 'who asked them to do that' type of way.

The final 'negative' has nothing to do with the team but, once again the dreadful refereeing in this division. It's just so inconsistent. To be fair the oddest decision in this game was kind of in our favour. The penalty. Elliot seemed to take out the Exeter forward who was last man standing, but it was out of the area. Either way, this should have been a straight red card. However what we got was a penalty and a yellow card? Makes no sense to me, but I'll take it as at least Elliot has avoided suspension and I really don't think we'd have come back even if they had not got the third goal.

This is where we'll really see the metal of the board, the management, the players and the 'five pounders' in the way one and all react to this second consecutive defeat. I'm hoping a return to 442, a couple of loan signings (perhaps one of captain material) and six points from the next two games.

I'm more excited than I probably should be at the prospect of a third division home match against Exeter City.

This is due in part to the excellent work the new board have been doing to create an occasion out of such a fixture. The 'official' launch of the new big screen combined with the premiership reminiscent prematch entertainment, what is going to be a bumper crowd thanks to the five quid any seat deal, something I know a lot of supporters have taken to heart and activley encouraged lapsed Addicks to take up. And more importantly my son Jacks first ever visit to the Valley. Mine was back in eighty one when we beat Gillingham in our last third division promotion season.

What will be interesting will be how the players and management team react to that first defeat against Hartlepool. Will Sir Chris feel it obligatory to shuffle the pack on the back of a loss and what I hear was a poor performance. I think we may see Reid back on the left with Jackson (in my opinion consistently our best player this term so far) pushed back to left back, Ecclestone out on the right once again with Wright Phillips and a n other partnering him. If fit I'd like to see Anysiha up top with BWP.

I'm going to go for a Charlton 2 1 win for no other reason than we do seem to do 'big occasions' well and it's my sons first game.