...So the 1st of July is nearly upon us. There's been plenty of conjuncture about have we got any money?, will we sign anyone?, have the current board got any ambition/sense? - We'll find out soon enough!

The bottom line is that those clubs already making signings, you know the European giants such as Juventus (who have a different window to England) and the likes of Liverpool and Man Utd who have made big bids are all in a completely different stratosphere to us and our peers.

We've seen a few out of contract signings happen across the football league (Gower being one) and a few loans (Millwall's excellent re-acquisition of Morrison on loan) but we won't really see any real action until the window officially opens. I'm certain there a quite a few deals about to be rubber stamped, but what no club of our current standing can afford to do is play with an open hand and allow another club to come and gazump them to a signing in what by the very nature of the new fair play rules and the current economic climate could easily happen. The competition to pick up a bargain is fierce at this level more so than ever.

We're either playing a close hand or just don't have the resource to go on a summer spending spree. (To be fair I would imagine with the complex way transfer payments are made, deferred and staggered we are still paying for some of the nineteen odd that were signed to get us out of the third division). If the latter is the case then we'll just have swallow it back and hope that some of the fringe up and coming youth players come good Harriot style.(There is a famous quote of someone saying 'you'll never win anything with youngsters' that was proven wrong.)

I was encouraged to see that Evina has turned up for training, maybe he knows that there may well be a better chance of him getting more starts this season - I for one think he's far to good a prospect and player to be warming the bench. I wouldn't even be surprised to see him maybe develop into more of a midfield player with his attacking qualities.

I'm sure that Sir Chris, whatever our circumstances knows what he's doing, regardless of what our board of directors may or may not be.

The impression the squad of players we've enjoyed for the last two season gives me, is that they are young, have the ability to develop learn and get better. (Something we have bared witness to over the last two campaigns). They are tight knit - hate losing and there seem to be no flash tarts in the team.

The 1st will be the day when we really know how the issue of personnel will pan out. Any of our better players who are going will be announced that day, and i'd imagine any deals that see new faces will also be verified. Bottom line is whatever happens I can't wait till I hear the thud of my new season ticket on my mat.

Final note, and i'm guessing you'll know who you are, things ain't that bad, last season was actually pretty bloody good when you analyse it against the last few terms and Charlton are most certainly NOT in East London!
Posted by Scoops at 12:21 No comments:

'It was twenty yeears ago today' well sort of...

In a fit of boredom at work today I decided to see what the silky skilled Carl Leaburn was up to these days. So did a bit of Google research (i'll come back to Leeeeeabuuurn in a bit), and then decided with the lack of CAFC news (lets be fair everybody needs a holiday) and the season now well and truly over (by the way, cheers to Kevin Phillips for ruining my Bank Holiday Monday) I thought i'd have a skim of a dig and see what the class of 92 are up to these days.

Who'd have believed when we triumphantly marched back to the Valley that bright December day what the next twenty years would hold for us Addickted?

Two promotions to English footballs top flight, the greatest ever play off final to take place at Wembely (take note Palace and Watford), three relegation's, third division football, a record point haul and promotion (again), the return of a Charlton legend thrice - the third time Sir Chris dragging the club up by it's lapels back towards the promised land as manager. Kevin Lisbies hat trick against Liverpool. It really has been a wonderful rollercoaster ride since our return to SE7.

Below is the team that lined up against Portsmouth.

This was back in the days when (some of those younger supporters may find this fact difficult to believe)  you were only allowed two subs. I wonder if we were to regress to the days of having just the one sub how much more a level playing field football would be for the smaller less well resourced clubs? 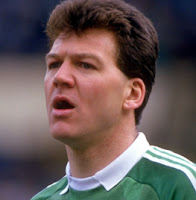 A firm favorite of mine, still can be seen at The Valley on club match days as a member of the community and match day hospitality team, and also still turns out for the Liverpool Football Masters Team, which is quite funny as he actually made zero appearances for the Anfield club between 1982 and 1985.

I wasn't all that happy when Pitch left for Palarse. His career was ended by a bad tackle by Paul Reid at Huddersfield Town, he even tried to sue for damages (a case which he lost). Apparently he is now working in the building trade. 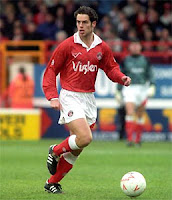 Minto went from Charlton to play for Chelsea, Benfica and West Ham, finishing his career at Rotherham. Where apparently initially (according to Wikapedia) he spent one day a week ferrying passengers to and from a Rotherham hospice as an unpaid volunteer. He can be seen as a pundit/match reporter on Sky TV and also achieved a degree in sports writing from Staffordshire University in 2008 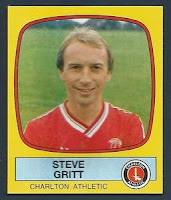 An absolute legend and part of the management duo along with Curbishley who oversaw the game. Gritt wasn't playing too much by this point, but wanted to play a part in such a big game. And he ran his socks off.

Gritt, who you would have thought it would have been easy catching up with has gone off the radar a little since he parted company with Bournemouth where he was head scout last September. Prior to that he famously kept Brighton in the football league with a last game of the season win as manager and even spent a very brief period as joint caretaker manager at Millwall. 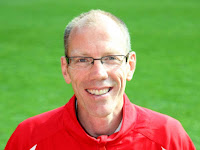 Simon Webster's career took a turn for the worst following his departure from Charlton to West Ham he only played 5 games for the Hammers, breaking his leg in a training ground accident (a tasty tackle from Julian Dicks apparently) forcing him to retire from the game in 1995.

He then went back into education and became a fully qualified physiotherapist, climbing the ladder of his new profession first as a junior physio working for Bromley NHS Trust then onto West Ham and Gillingham as Head Physio and now working as Practice Manager for Nuffield Health in Cannon Street and also working as Physio to the Charlton Womens team.

Having left Charlton to go on and play for Wigan, Oldham, Scunthorpe and Bolton Sweaty returned to his native Scotland and up until only a couple of weeks ago had spent some time as assistant manager and under 20 team boss at Ross County. Interestingly at 43 he still retains his players registration.

A firm favourite of myself and many the Valley faithful. Another ex Charlton player who has very recently made a move. Following leaving Charlton he played a season for Cardiff before moving to Gillingham to be nearer his family (and Mother who was in ill health), he 'retired' from football after just four games for the Gills stating 'I haven't fallen out of love with playing football, it's the politics of football and becoming a commodity I don't like.'

After retiring he played a handful of games for Crawley Town and Lewes, both close to his Brighton roots and then set up a property business. In the last couple of weeks he was named new manager of Florida Adrenaline in the United States Premier Development League (the US equivalent of our Conference Premier in their terms). 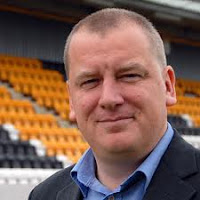 Not a name that springs to mind in the Charlton Hall of Fame. He was built like a pitbull terrier, squat and wide.

He only played the five games on loan that season for us (his parent club being Norwich City). His career spanned ten years and thirteen clubs, and he went on to become a football agent, football chairman (Cambridge and Rushden and Diamonds), Caretaker manager (Cambridge after they parted with their manager whilst he was on the board). Apparently he now owns racehorses.

I've taken this information directly from wikepdia, i'm not sure about the security guard bit, what I do know is that thanks to him there is a photograph taken by my late father of me eating a smelly old 'boiled' pair of addidas gazelles, something I said i'd do if he ever scored a hat-trick. (Cheers Ipswich).

'After retiring, Leaburn completed a study for a BTEC Radio Broadcasting course. He worked for BBC London as a match summariser and interviewer. He now works for Premier Leagueproductions as a match analyst and occasionally as a security guard for the Canary Wharf estate. Leaburn also worked with Redstone.fm, a community radio station for Redhill, Reigate andBanstead.' 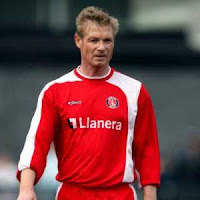 If not the most talented strikers ever to play the game, certainly one of my all time favorite football people. A great writer, and picture framer - so i'm told. Gary was senior commercial executive at the PFA this was followed by a stint as Managing Director of Oakwood Promotions then as Chairman of Leisure Link Golf Holidays and for the last two years has been group head of marketing at a company called AllClear Insurance Services.

We all know what an important part Colin played in our first game back at the Valley. And he can often be seen at the ground working as part of the hosting team and plays for the vets. 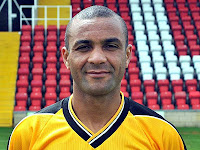 Kim went on to play for an amazing 16 clubs before his retirement, scoring 68 goals in 333 matches. Kim is now residing in his native Ghana and is owner and president of Takoradi Football Club. This is actually really interesting, he founded the club in 2009 in honour of his granfather George Alfred Grant who was an extremely influential political activist in Ghana. Kim was also interestingly a direct decedent of Arthur Wharton who was the worlds first black professional footballer.

Last and by all means least. In the interests of common decency (and the fact that some under 16's might read this) I won't really go into and don't need to tell anyone what HE has been up to since. 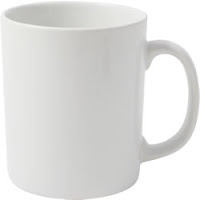