So our first signing of the season is made, just in time for the Welling United game.


As you'll see a career total appearances of 30 over four years with a return of 5 goals should hardly see BWP quaking in his boots but with the exception of Alonso all signings made by Sir Chris and his scouting team to date have all been at the very least adequate, usually pretty astute (see Kermogant).

I would imagine this is the first of two or three that will drip through over the next week and a half prior to our trip to Portugal.

I think we all need to get used to the fact that most of the rebuilding of the side took place last summer with the unprecedented, and probably never to be seen again twenty something new faces coming through the gates of The Valley.

In my mind we do still need, at the very least, another midfielder and someone to compete with Bradley Wright Phillips or be able to cover his position in the event that his knees start playing up again. 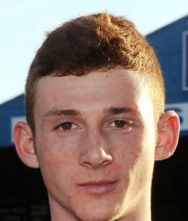 Me and the missus have decided to treat my Son to the new Charlton home kit for the first time. He's six, been to a couple of games last season and thanks to the football club he's been attending at school, match attax card game and Euro 2012 is really beginning to get it (and thanks to my hard work explaining why its better to support your local team over his mates who are mainly Chelsea and Arsenal) he is now starting to show early signs of becoming an addicktoholic.

Up until now he's been attending football club amidst his Chelsea and Arsenal replica kit clad mates in an old England kit that belonged to one of his older Sisters, we have promised and promised as a reward for good behaviour we'll get him the new Charlton kit. And on the whole he has been a good boy. So good in fact that we promised he could have his name and a number on the back.

So we went to the new Nikeeeee stocked club website to price up and order it. A stiff drink was required! He's too big for the twenty two quid kiddies kit so we had to go junior. One shirt with his name and the number eight, Nikeeee shorts and a pair of socks. SEVENTY FIVE CHUFFING QUID!!!!! Saying that we could save six quid to go without the NPower champions gold star badge. Well that'll be alright then, that brings it below the magic 69 then! as they say VFM.

Perhaps i'm being a bit naive, seeing as we are third division champions and all that? Did the Macron kit really cost as much?

And there we were all looking forward to some good old fashioned second tier mediocrity...

...So the doom lovers are back out in force. And to a certain extent, who can blame them. (I do however find it odd that some people seem to get such enjoyment from potential bad news and possible calamities).

Rumours are flying around and gathering at pace that all is not great in SE7.

My initial thoughts were (until the conspiracy theorists started) that it was simply a case that the resurgence of the Addicks was ahead of schedule hence Varney leaving his post.  The rumours are that Sir Chris and Tony 'The Hat' Jiminez have fallen out, Zabeel investments made a new bid to buy the club last month, 'we've not got no more money', Zabeel are to make another bid immanently. It's all a bit dizzying!

Two things are for sure. We'll all find out pretty soon what the hells going on (very probably nothing to worry about) good or bad and that once again, it's never plain sailing (with the exception of last season) being a Charlton supporter.